The Right Thing to Do | The Girl Who Wore Freedom
708-669-4696 info@normandystories.com
Experience the story... Watch now!

The Right Thing to Do

Last spring, my husband and I hired a driver to show us the legendary countryside of Tuscany. Remo’s first question, “Would you like to see a beautiful cemetery?” was an unexpected surprise. 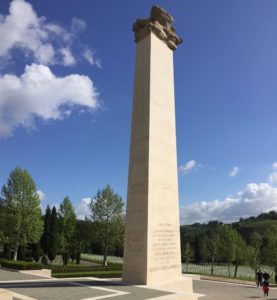 As we drove south from our hotel in the very heart of Florence, red-roofed density gradually gave way to chaotic greenery and open spaces. “We’re heading for U.S. soil,” Remo told us, explaining that Italy gave the land for this cemetery—70 acres along the Greve River—in gratitude for America’s role in freeing the country from 21 years of clench-fisted Fascist rule.

With one sharp right-hand turn, the visual chaos was gone. In its place were the manicured lawns and tree-lined drives of the Florence American Cemetery and Memorial. Row upon row upon row of white markers set out with geometric precision marched up a gentle slope to a wide terraced plaza. There stood the Memorial—two pavilions connected by a covered walkway. Standing guard in front of this structure, a soaring cenotaph.

More than four thousand men and women of the United States Armed Forces are buried here. Fourteen hundred more are listed on a wall of granite panels that honors the missing.

Remo parked the car and led us to the nearer of the two pavilions. Here a stunning map of northern Italy—an intricate marble mosaic—illustrated in remarkable detail the U.S. military operations in the region. I knew that my Uncle John had fought in Italy with the 349th Infantry, 5th Army. And so, I could easily see which battles that he had taken part depicted on that map.

The sky was a brilliant blue, the trees, and the grass a deep green; the headstones glittered in the sun. I walked among the markers and stopped many times to read names, dates, home states. Surely, there were men buried here who had fought alongside my uncle. 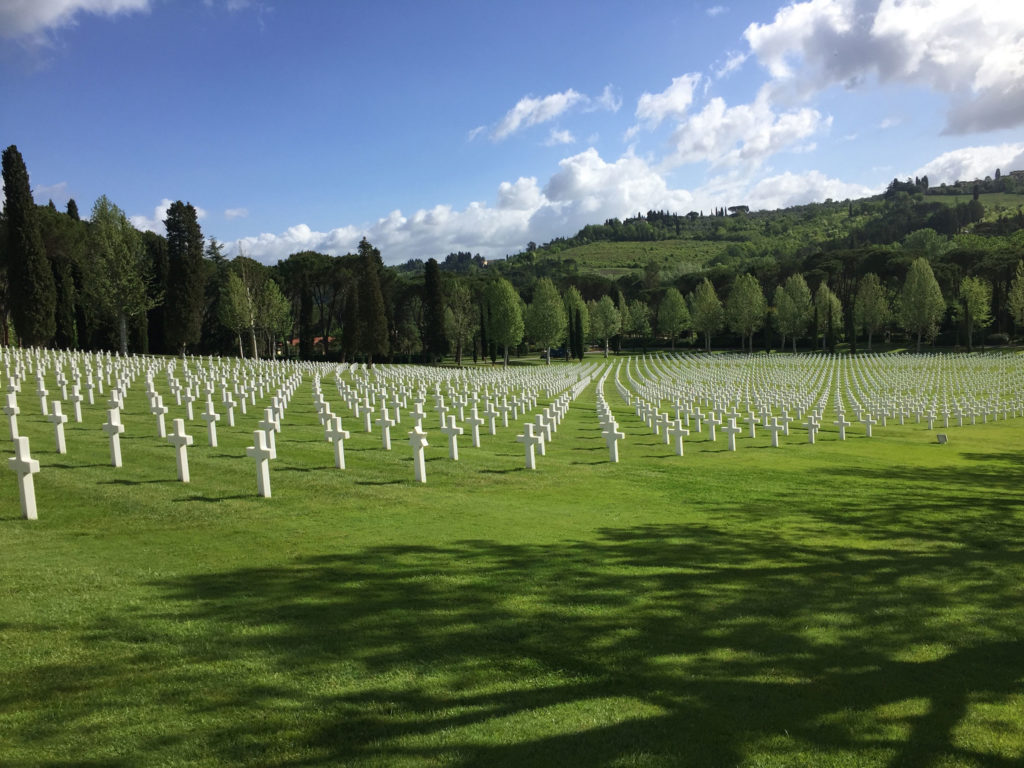 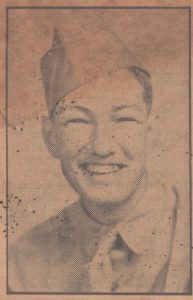 Uncle John was twenty years old when he joined the Army in August of 1942. France, Italy, Belgium, nearly all the countries of Europe, were occupied, and the people were suffering. The Germans were winning in Africa, Russia; the Japanese dominated the Pacific and had even seized two of the Aleutian Islands off Alaska. John believed it was up to him and all the young men of America to fight back.

He served overseas from December of 1943 through the end of the war. Though he rarely talked about his wartime experiences, certain anecdotes have become part of the family lore:

Once John was handed a letter from home and wedged it between two rocks, saving it “for later.” No sooner had he done so than a rat scurried by, snatched the envelope, and ran off. John’s precious letter: gone.

Then my grandmother sent John a batch of cream puffs—not thinking what condition they’d be in when they arrived. Ever after, the family joked that Grammy must have thought John could use her baked goods to kill the Germans.

After being given a break from their battle positions, John and a buddy were resting along a nearby road smoking cigarettes when a jeep approached. It was General Mark Clark. “What’re you boys doing here?” was his first question. “I had to be the one to answer,” John laughed. “Me, the one who never speaks up.” The General’s second question was, “Which way to the front?” John pointed the way, astonished to think that at that moment, he knew more of what was going on at the front than the General did.

I heard Uncle John describe a battle scene only once: the misery, terror, and frustration of being pummeled by relentless artillery fire from Germans in a mountaintop monastery. When U.S. planes finally got the green light to bomb the monastery, the American soldiers, John among them, began cheering. 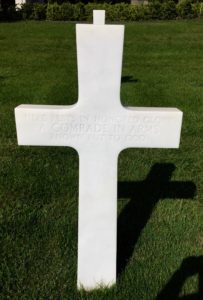 The tales John told the family made warfare sound like an entertaining adventure, but most of his wartime experiences remained untold. Too painful. Too haunting. The stuff of nightmares. However, John did confide in his older sister (my mother) about two incidents he found deeply troubling.

The first took place when he had taken cover with his squad in an old stone building. He stepped outside to have a smoke, and within moments, a shell landed; the building was destroyed; the men inside were all dead. He was left alive and alone.

The second occurred as John was huddled in a defensive position, yet clearly able to see a young German soldier looking back at him across what must have been a very confined field of battle. “He was just a kid, like me. I didn’t want to shoot. But I knew that if I didn’t kill him, he was going to kill me.”

My mother told John he must not feel guilty. He must try to stop grieving. Who died in battle and who survived, that was far beyond his control. He was just a soldier. He had no other choice. It was war.

We were told that Uncle John drove the jeep that led victorious U.S. forces into Rome. I have my doubts that he drove the first jeep, even though it is true the 349th Infantry was the first American unit to enter the Eternal City after it was liberated. The Romans threw flowers.

From our visit to Florence, my husband and I were on to Pompeii and then to Ravello on the Amalfi Coast. There, we found Palazzo della Marra, which turned out to be our favorite restaurant. When Angelica, the hostess, told me her mother, Margherita, still ruled in the kitchen at age 81, I asked if I could thank her. “She’s shy,” Angelica said. “She doesn’t speak English.”

“Well, at least I’ve learned to say ‘delizioso,’ “I said. 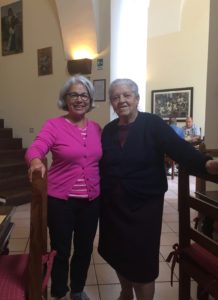 After I offered my one word of praise in Italian, Margherita and I began to converse, haltingly. I don’t know what prompted me to say, “My uncle. U.S. Army. Italy. 1944. 1945.” Margherita’s face suddenly became grave. Sad. She put her hand over her heart. Then she spoke. Angelica translated.

“My thanks to your uncle,” she said, and slowly shook her head. “Before the Americans came, the children had no shoes—and no food.” I calculated quickly in my head; Margherita was born in 1937. During the war, she would have been one of those hungry, barefoot children.

Since returning home, I’ve often thought of the young men, like Uncle John, who crossed oceans to fight in World War II. They had no burning desire to be warriors or heroes. They went because they believed it was the right thing to do. Thousands did not return.

They gave their lives to defend their homes and their loved ones.

To free the world from tyranny.

And so, the children in war-torn countries could have shoes. And food. 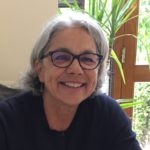 Janice Blake fell in love with the art and craft of writing at age eight. As a young woman, she launched her writing career at Polaroid Corporation in a marketing organization that was legendary at the time. For more than three decades she worked as a freelance copywriter and editor in the Boston area. She edited books for the Harvard Business School Press and the Brazelton Institute at Boston Children’s Hospital and taught writing workshops at the HarvardBusiness School. In recent years, she has been researching and writing about World War II. She is the author of The Battalion Artist due out in September. She and her husband, John, recently relocated to Southern California to be near their children and grandchildren.