“We were depending on considerable assistance from the insurrectionists in France. Throughout France the Free French had been of inestimable value in the campaign.

Without their great assistance the liberation of France and the defeat of the enemy in Western Europe would have consumed a much longer time and meant greater losses to ourselves.”

Discover the untold stories of D-Day from the men, women, and children who lived through German occupation and Allied liberation of Normandy, France. Powerful and deeply personal, THE GIRL WHO WORE FREEDOM tells the stories of an America that lived its values, instilling a pride in country that is in danger of becoming a relic of the past.

THE GIRL WHO WORE FREEDOM brings us to Normandy, France. Once an idyllic landscape, Normandy had succumbed to German invaders who overran its farms, its manors, its countryside.

Here we meet Dany Patrix, Maurice Lecoueur, Henri-Jean Renaud, and others, who recount their unique relationships with the Allied forces who liberated Normandy on June 6, 1944. The journey from occupation to liberation, to acceptance and forgiveness to gratitude and pride, is explored through interviews with French survivors and American veterans in this powerful, personal film that tells stories handed down over two generations.

We visit Brecourt Manor, the site of the battle between the men of Easy Company – known as the Band of Brothers – and a German battery. We hear from the children of D-Day, who were cared for by American soldiers after their families were killed in the onslaught. We explore the nature of war, of forgiveness, of gratitude through interviews with French survivors and American veterans.

We travel today’s United States with Flo Plana, who seeks out heroes of World War II to collect and curate their stories for the Utah Beach D-Day Museum. We meet veterans like Ceo Bauer, Charles Shay, and Bob DeVinney, who recount their experiences and the relationships they built over the summer of 1944.

Normandy itself is now a living war museum, with shrapnel on the beaches, bullet holes in its walls, and blood staining its church pews. Those that were there have vowed never to forget the lessons of World War II and to pass down the value of freedom to their children and their children’s children.

The film closes on contemporary D-Day celebrations of remembrance and gratitude, where French citizens of all ages celebrate those who were and are willing to defend freedom because they, the people of Normandy, know all too well that freedom is not free.

Countless documentaries have been produced about the invasion of Normandy; most focus on US and German troop movements. Very few, if any, focus on the experiences of the French citizens of Normandy. What did they and their families experience during the four years of Nazi occupation? What are their memories of the summer of 1944?

Three years ago, I knew little about France, and had only a cursory understanding of what happened on D-Day. That all changed in June, 2015.

I had followed my son and his unit, the 101st Airborne Division, to the annual D-Day celebrations in France. During my first moments in Normandy, I felt like I’d been spun out of a time machine. I was surrounded by Willy’s Jeeps, GIs, and American flags. Songs like Boogie Woogie Bugle Boy were playing in the background. It was the most patriotic event I have ever seen. I was surrounded by World War II veterans who had been a part of the invasion, current American soldiers, and by thousands of French citizens – many dressed as 1944 American soldiers or civilians. We were all there, together, watching as modern-day American paratroopers recreated an event from 71 years earlier. It was surreal and incredibly powerful.

I stood there, deeply moved. My son was approached by a French woman who asked for a picture. Delighted and proud, I introduced myself as his mother and offered to take the picture.

This natural, instinctive decision would change my life.

I soon learned that I was standing face to face with history itself – Dany Patrix Boucherie, “The Girl Who Wore Freedom.” Dany, her husband Jean-Marie, and her daughter Flo, became our guides in Normandy. They embodied the spirit of love and gratitude I felt from the French throughout my time there.

It was this powerful hospitality and love the French people showed Americans that captivated me. It was overwhelming. I found myself wondering… why? Where did it come from? How did it start? There is a stereotype that the French hate Americans. However, everything I was experiencing completely contradicted this.

One particularly powerful image stayed with me after I returned home from Normandy. World War II veterans walked around each day with big red kisses on their foreheads and faces, kisses that were given to them by grateful French women of all ages. Each veteran wore the lipstick kisses proudly as a badge of honor. As I was thinking about this one day, it hit me…it was so clear.

This is a love story.

It has been estimated that Allied forces suffered some 10,000 casualties during the invasion to free France from Nazi occupation. The people of Normandy helped to bury thousands of these young men – young men who had died to free them.

Then the U.S. soldiers entered the city. They gave the citizens of Normandy simple gifts: whatever they had with them gum, chocolate, life-savers candies, jackets, and spent parachutes. They introduced them to pineapples and corn. They even gave them rides in their Jeeps.

It was these acts of sacrifice and kindness that moved the French to fall in love, a passionate love. This is the overflowing love, gratitude and joy that can still be witnessed today.

THE GIRL WHO WORE FREEDOM reminds viewers of who we are as Americans when we are at our very best. When we are standing up for those who are poor, oppressed, especially those whose freedoms and liberties have been stolen. It will be a reminder that individual and national acts of bravery, care and compassion have the power to impact others for generations.

When Christian Taylor followed her son, Sgt. Hunter Taylor of the U.S. Army 101st Airborne Division, to an annual D-Day ceremony in Normandy, France, she felt as if she landed in the middle of the most patriotic, flag-waving, Main Street America, Fourth of July parade ever.

Hundreds, maybe thousands, of people – mostly French and many dressed as civilians or GIs from the 1940s – filled the streets. They crowded around modern-day American soldiers and World War II veterans who had been part of the D-Day liberation of Normandy. A French civilian approached Sgt. Taylor thanked him for his service, and asked for a photograph. Christian was amazed – why was this happening?

Danielle “Dany” Patrix Boucherie, a childhood survivor of D-Day, explained. She introduced Christian to other survivors and families of survivors, who shared personal stories about the occupation and liberation. Their stories underscored the damage caused by occupation, and gave new definition to the idea of freedom requiring sacrifice.

Dany became THE GIRL WHO WORE FREEDOM when her mother made her a red, white, and blue dress from parachutes, which she wore to honor Allied forces at the first D-Day commemoration. Then, as now, her personification of gratitude towards the soldiers who liberated her community keeps the memories alive through annual D-Day celebrations and personal relationships.

THE GIRL WHO WORE FREEDOM reminds Americans and the world of America at her best: when she values people over politics, seeks to right the wrongs of injustice, and sacrifices, when necessary, so others might be free. The film is a timely reminder to do as the French say – “Never forget.” Never forget what we can be when we are true to our deepest values. 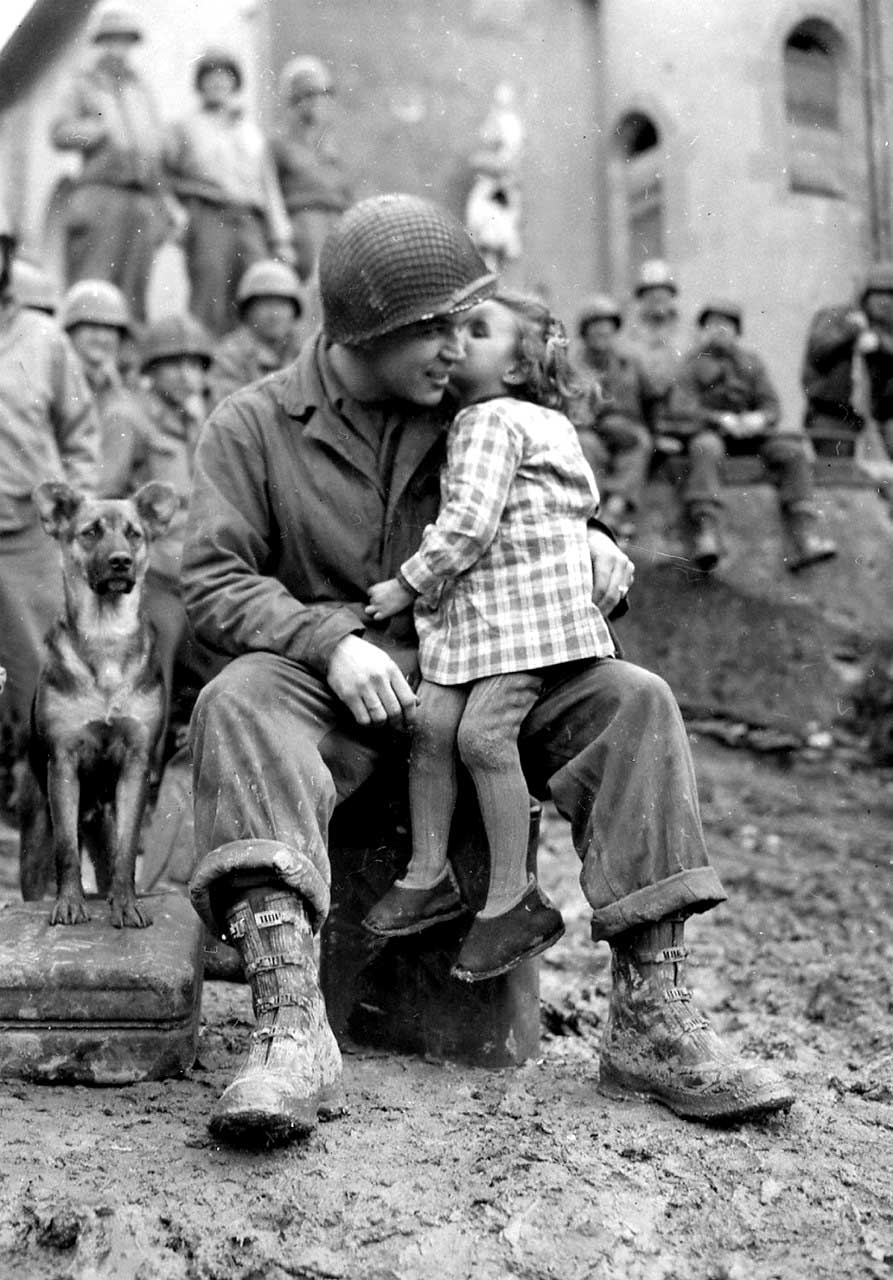 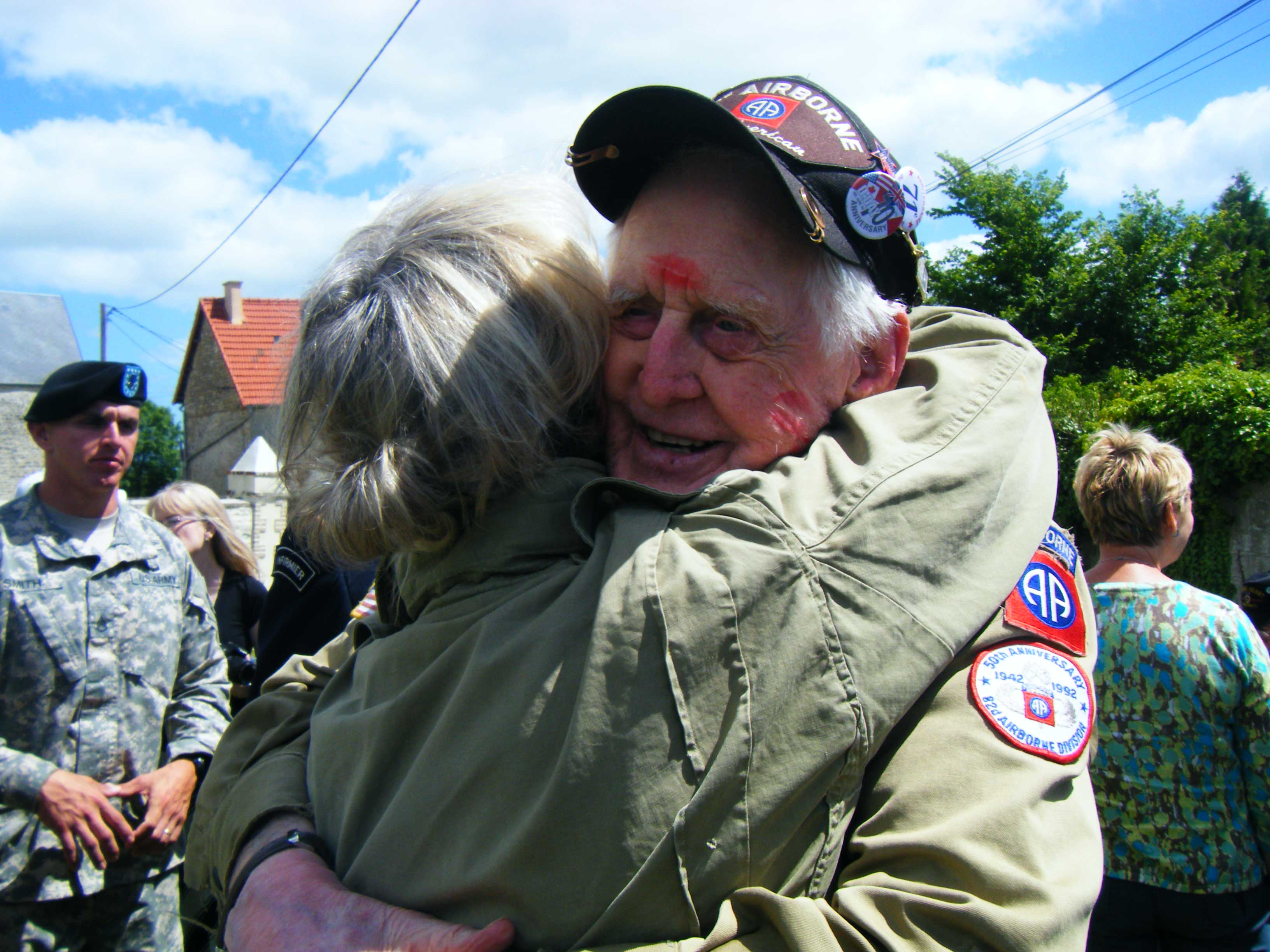 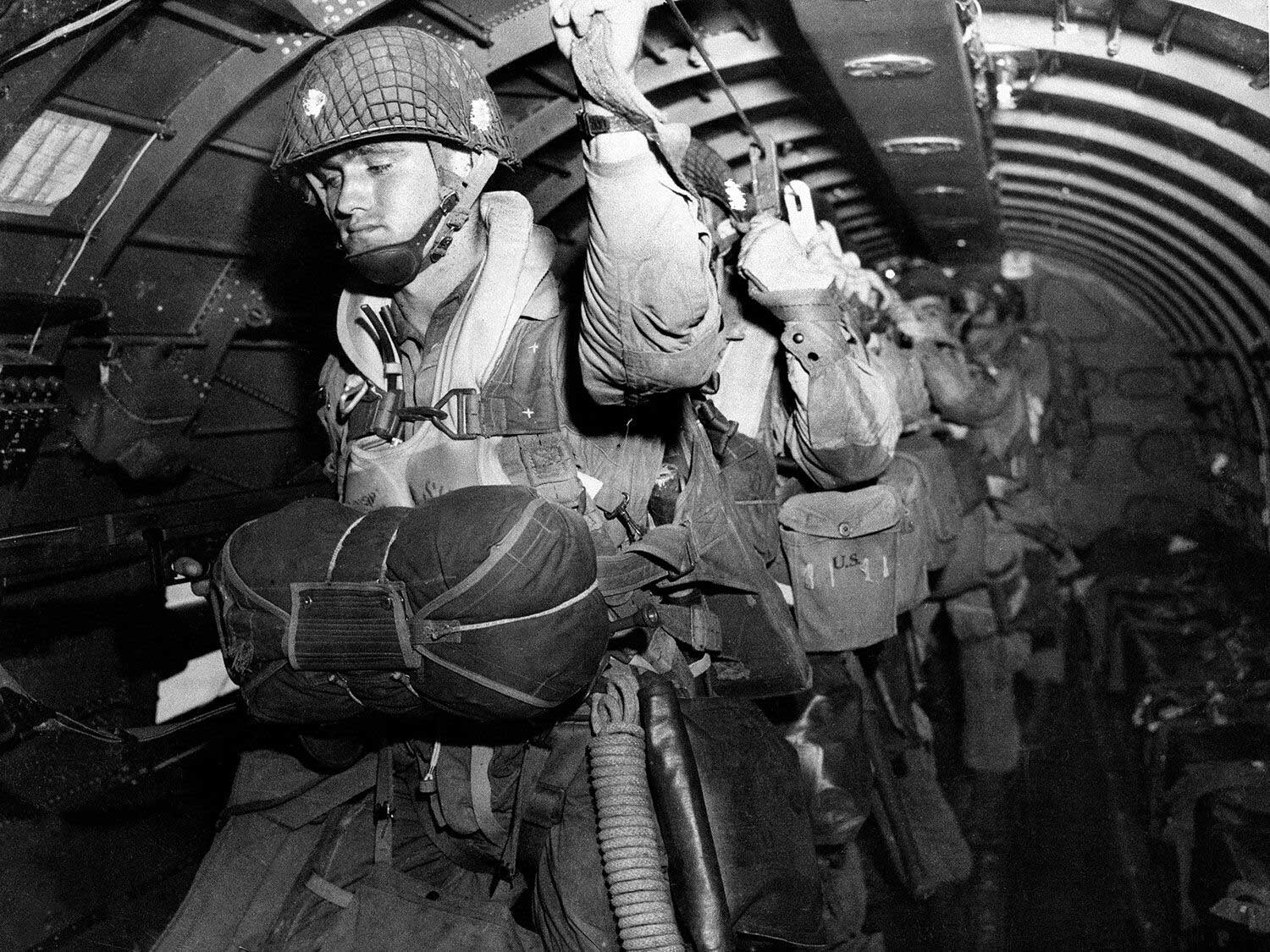 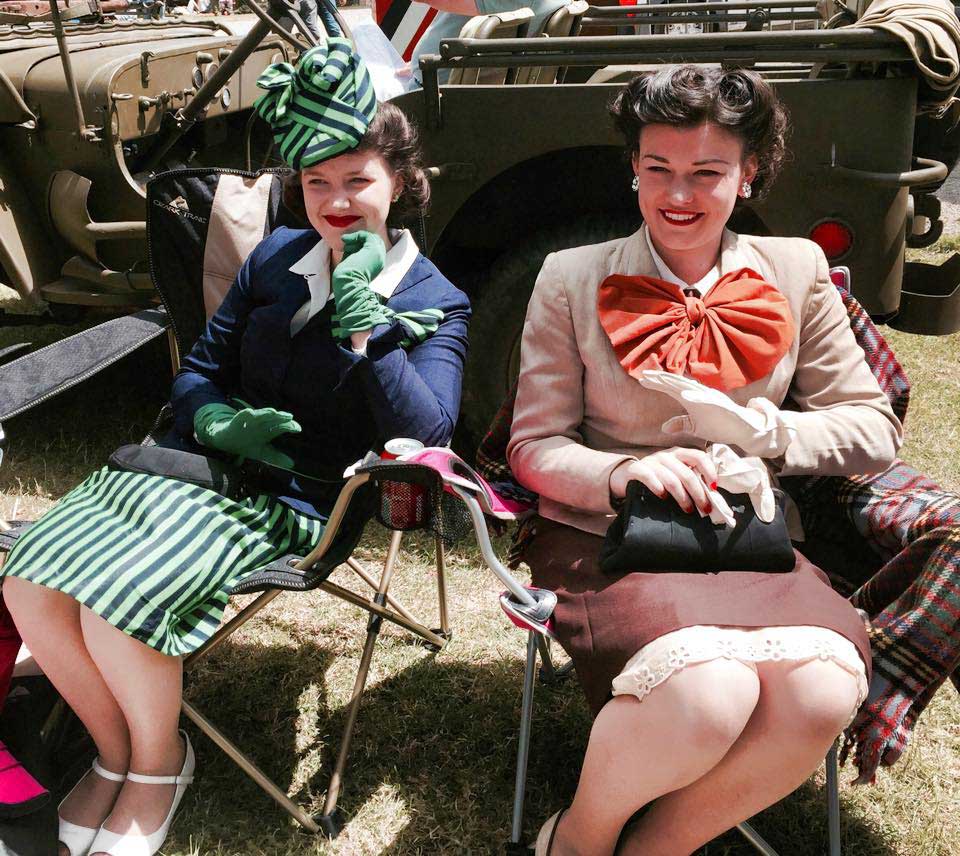