In addition to our soldiers, we honor the veterans who left their country to serve and assist overseas forces.

It’s hard to imagine today— pouring your heart out to a significant other and sending it knowing it will be received almost instantly, but that wasn’t the case in WWII.  Handwritten letters needed to find their intended, and to do that people needed to be brought in. 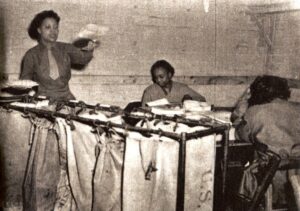 But the story of the 6888th is much more than that, they helped manage the morale of the men on the frontlines.  In February of 1945, those stationed in Birmingham, England to handle the mail were overwhelmed.  In addition to daily operations, they had warehouses filled with millions of pieces of mail for those serving in the European Theater.  Unique challenges included letters simply addressed to “Buster, U.S. Army” or common names like Robert Smith (There were 7,500 enlisted).  With the lack of mail sighted as a reason for hurt morale, something needed to be done.   Enter the women of the 6888th.

When they arrived in Birmingham, they were greeted with unheated and dimly lit warehouses stacked to the ceiling with letters and rat-infested packages of perishables.  The unit, made up entirely of women, quickly set up 3 separate 8-hour shifts so work could continue around the clock, seven days a week.  Individual servicemen were tracked down by maintaining nearly 7 million information cards including serial numbers to distinguish different individuals with the same name.  They investigated insufficiently addressed mail for clues to determine the intended recipient as well as the unenviable job of returning mail addressed to service members who had died. 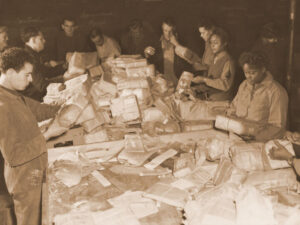 With the new tracking system they created, the women processed an average of 65,000 pieces of mail per shift and cleared the six-month backlog of mail in three months.  The women adhered to the motto of, “No mail, low morale,” and believed they were providing essential support for the U.S. military by linking service members to their loved ones back home.  With the backlog in Birmingham gone they moved on to France in June of 1945.  When they arrived in Rouen they were greeted by another backlog dating back 2-3 years.  This time the women of the 6888th worked with male and female French civilians and German POWs addressing the backlog in less than 6 months.

After Rouen, the 6888th moved to Paris in Oct of 1945.  With the end of World War II, the strength of the 6888th Central Postal Directory Battalion was reduced by nearly 300 personnel. The morale of the battalion suffered as the workload fluctuated with an influx of holiday mail. The 6888th also faced a new challenge, theft of small packages with certain items to supply a “war-deprived populace.”  The women were forced to systematically search the local civilians they worked with to recover stolen items. 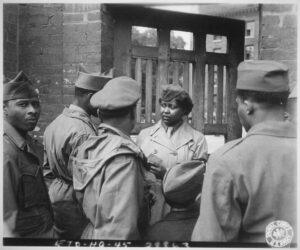 In February 1946, the remainder of the unit returned to the United States and were thus disbanded.  Except for smaller units of African American nurses who served in Africa, Australia, and England, the 6888th Central Postal Directory Battalion was the only African American women’s unit to serve overseas during World War II.

In 1996, the Smithsonian Institution’s National Postal Museum in Washington, DC held a program honoring Charity Adams Earley as commander of the 6888th Central Postal Directory Battalion. The 6888th has also been included in the exhibits and educational programs of the U.S. Army Women’s Museum in Fort Lee, Virginia. The history of The 6888th is also maintained in records held by institutions such as the National Archives for Black Women’s History in Washington, DC, and the Library of Congress.

To learn more about these amazing women and their experience, check out: https://history.army.mil/html/topics/afam/6888thPBn/index.html 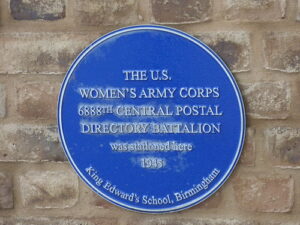 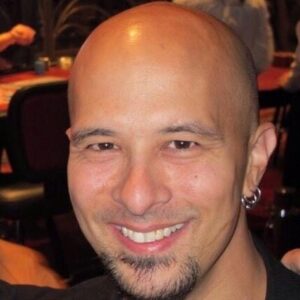