Remembrances of a French Village's Longest Day - Part 2 | The Girl Who Wore Freedom
708-669-4696 info@normandystories.com
Help us tell the story... Make a donation

This week we are excited to share part 2 from an interview by Cecile Patrix, mother of Dany Patrix-The Girl Who Wore Freedom, for the 40th Anniversary of the D-Day landings. This piece was originally featured in the LA Times, May 27, 1984, and was originally authored by PAUL DEAN, Times Staff Writer.

Have you read part 1 of this article? It’s out now, so go read that one first.

No Facilities for Prisoners

There were no facilities, Cecile knew, for prisoners. So maybe these three were in the clump of German soldiers she later saw being marched at gunpoint ahead of a GI. They went to the edge of town, and there was a long rattle of machine-gun fire.

Cecile saw nothing. But she says, the GI came back alone.

American bodies were straightened, covered, and collected. Trucks moved back to the beach with wounded arms flopping over their sides and floors dripping blood. Cecile found a man with his shoulder torn open and offered him milk. He asked her to drink some first. In war, he had learned, there’s safety in paranoia.

At noon, a new sound entered the village. Tanks had been brought up from Utah Beach. The first rumbled into the town square, and the Patrix family waved. A name, Apache, was painted on its side and Cecile could think of nothing more American than that. Liberation, clearly, was here to stay.

That day, next week and the following month were nose-to-tail vignettes with relief and excitement a constant reducer of sleep. Danielle was awed by the size of American giants with blue eyes. Francis learned to say “yeah” and begged jeep rides. Gum. Hershey bars. American flour.

Sunday, June 11. The date had been scheduled months earner as the day of Francis’ first communion. It took place despite the war. But with military modifications.

Owing to the overnight addition of more than 500 English-speaking Catholics to the parish of Ste. Marie du Mont and as the first Sabbath after D-Day, an American chaplain asked to conduct the service. Francis Patrix and two dozen other young communicants were chauffeured to the church in a procession of jeeps.

Paul and Cecile threw a party for her son and his communion escorts, Larry Cherington of Oak Harbor, Wash., an airborne sergeant, and Harry Kropniki, an MP from Bound Brook, NJ. 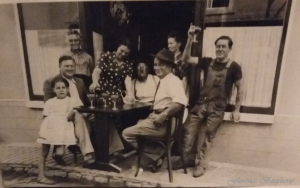 Cherington, rocking on the back legs of a parlor chair, began to sing: “South of the border … down Mexico way.” A bottle of Calvados, a hefty apple brandy, was uncorked. Cherington assumed it was wine and downed a glass with one swallow. He chug-a-lugged a second. In mid-phrase, with the mission bells tolling, Cherington collapsed backwards over the top of his chair.

Paul and Cecile and the children collected the litter of street battles as souvenirs. Parachute panels. A combat knife. Empty machine-gun cartridges filled with sand from Utah Beach. An American flag that had been payment for fixing the flat on the jeep. A Very pistol. A cricket noisemaker that airborne soldiers used to identify themselves to buddies scattered by the drop. A propeller from a wrecked landing craft. …

As became common for so many grateful Normans, the collection was built into a tiny museum that, in turn, made a shrine of the bar-restaurant Paul and Cecile Patrix opened after the war. They called it obviously, Bar of 6th of June. Their business cards, until the day the cafe was sold in 1962, promised in English: “Best Welcome to the Allies.” 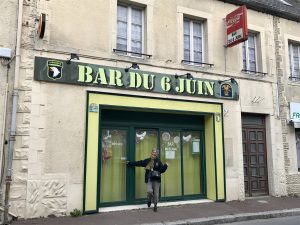 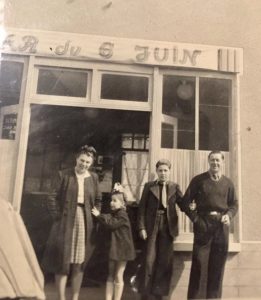 Paul Patrix died in 1970. Five years later. Cecile met an old friend, Robert Bourguinon. He had been a guest when Paul and Cecile married. Then came the war when Bourguinon fought with the Resistance and after that a move to the United States and marriage and eventually the death of his wife.

So, widower Bourguinon and the widow Patrix were married and came to Los Angeles where they live in retirement but remain artifacts of D-Day as firm as any piece of machinery still poking from tidal flats or a Normandy forest. 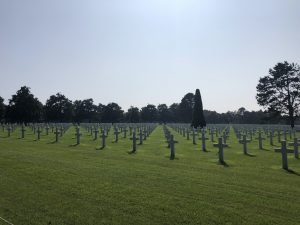 “Ours was the first village liberated by the Americans,” said Cecile, now 72. “We will remember D-Day because we’ve never been able to thank all those young Americans who now are resting in cemeteries in France.”

“Every year, we never miss, we go back to France and place a wreath at the Normandy American Cemetery overlooking Omaha Beach. There are 10,000 Americans there.”

That number, she knows, is tragedy enough. But there also is a father buried alongside his son at St Laurent and in 33 instances, two brothers rest side by side.