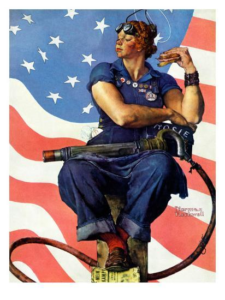 Early in my junior year, I was asked to choose a primary source document and research its historical context. I choose one of Norman Rockwell’s Saturday Evening Post covers, the first representation of Rosie the Riveter. She would become an icon of both war-time America and feminism. Here is an excerpt from the project:

The Saturday Evening Post cover of May 23, 1943, pictured above is the original artwork by Norman Rockwell titled “Rosie the Riveter.” She depicts the rising of women in the workforce during World War II. Norman Rockwell illustrates her with a confident expression. She is drastically different from the expected 1940s woman who would be on a magazine cover. She doesn’t follow commonly accepted beauty and women’s standards of being thin, wearing a dress, and having her legs crossed. Instead, she’s pictured holding her head up high, having muscles, and having a masculine stature. She’s wearing factory attire, she has a rivet gun in her lap that were commonly used in factories. She has a lunch box with “Rosie” on it and a copy of Hitler’s Mein Kampf under her foot. This is the first appearance of Rosie the Riveter, a character attributed to Norman Rockwell. Although, most people know Rosie from her more popular image where she’s flexing with a speech bubble saying, “We can do it.” 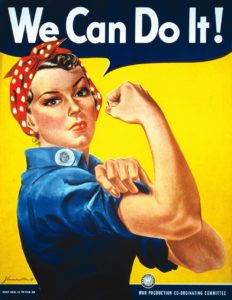 Eventually, Rosie became more than the character pictured; she became the label for women who joined the workforce and even a feminist icon. In fact, the audience that Norman was trying to reach through this cover was those select women who wished to break out of the gender-stereotyped roles of motherhood and domesticity. Instead, go to work doing a job thought of as masculine. He was also aiming this at the general public to get them more accustomed to the idea of women holding these types of jobs.

As with much of Rockwell’s work, this cover was created in response to current events. With a lot of men leaving to serve in World War II, women were picking up the jobs that they left behind. From 1940 to 1945, the percentage of women who worked outside the house increased from 27% to 36%. The year 1943 was the peak of women in the workforce, and they made up 65% of workers in the U.S. aircraft industry. Since gaining the right to vote in 1920, and starting to promote the idea of equal rights in 1923, many women were ready for this next step towards equality.

Through doing this project, I learned about a part of WW2 history I had previously not known. An unexpected upside of WW2 was the ability of women to occupy jobs previously unavailable to them. Men left unoccupied factory and shipyard jobs in the wake of WW2. Then the American public was forced to bend its preconceived notions of who could occupy the factory and shipyard jobs. Often times the “Rosies” were the ones creating and producing supplies and munitions for the war. Even though women weren’t in combat, they still gave their time and efforts in America. 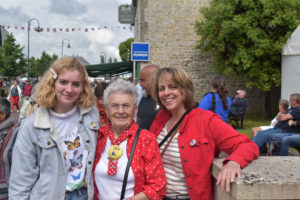 This summer my family took a trip to France for the 75th anniversary of D-day. It just happened that on my flight there was a “Rosie” named Mae. The flight attendant announced her name over the intercom, honoring her for building plane parts for World War II. After the flight, I got to talk to her and thank her myself for her service. She was very excited to be honored for her work, saying that that wasn’t very common. She was full of energy, even at 92 and after an overnight flight! She told me that she was 17 when she started working as a Rosie — exactly my age. I can’t even imagine doing what she did at my age, but of course, she grew up in a time very different than mine. The war started in Europe in 1939, when she would’ve been around 12 or 13. The U.S. entered in 1941, two years later. That means that throughout the course of her teenage years, a war was raging. With 10 million men drafted into the military, undoubtedly she would have known men that went to war. She definitely had a very different teenage experience than I have had.

We ran into Mae a few days later in the town of Sainte-Mere-Eglise. She was still energetic and enthusiastic. I think we can all take inspiration from the “Rosie the Riveters,” they took the initiative and stepped up to take part in the fight for freedom. 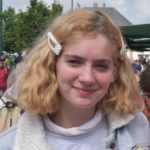 Kate is a senior in high school in Indiana. She’s involved in Art Club, Drama Club, and Echo Club. She plans to study animation in college.