Heroes of Rescue Flotilla One | The Girl Who Wore Freedom
708-669-4696 info@normandystories.com
Experience the story... Watch now!

Heroes of Rescue Flotilla One

We have shared many stories of service and sacrifice from D-Day involving the Army and Navy but what about the Coast Guard. Many are unaware of the unique and important role the Coast Guard played on D-Day. 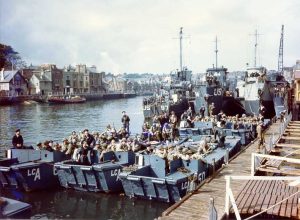 Coast Guard Flotilla 10 tied up in the background along with British landing craft, prepare to sail the English Channel and invade Nazi-occupied France. These landing craft landed U.S. troops on Omaha Beach.

Shortly after sunrise on June 6, 1944, the Allied forces began to bombard French beaches using battleships, cruisers, and destroyers firing from their place on the water. In the hours before the onslaught started, paratroopers had deployed, a French city had already been liberated from German rule, and thousands of Allied troops had begun boarding landing craft that would take them to the beaches of Normandy. In the hours that followed, bombs would rain from above and Gen. Eisenhower would broadcast a message to the French people, “The lives of many of you depend on the speed with which you obey. Leave your towns at once – stay off the roads – go on foot and take nothing with you that is difficult to carry. Do not gather in groups which may be mistaken for enemy troops.” Finally, thousands of Allied troops would depart from the comparative safety of their landing craft and storm the beaches.

There were 132,715 troops from America, Canada, the United Kingdom and other Allies who stormed the beaches that morning, arriving on 4,126 landing craft, not to mention the 20,000 airborne troops who came from above.  But among them on that fateful day that would come to be known as D-Day, was a group of servicemen from an unexpected military branch: the U.S. Coast Guard. 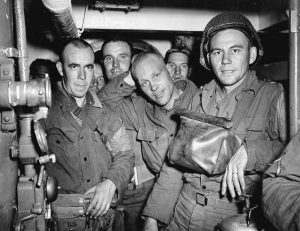 Bound for Normandy: U.S. Army troops on board a Coast Guard-manned LCI(L), during the night of 5 June 1944.

Even some of those who joined up hadn’t expected to be heading to war.

“I thought, ‘Well, the Coast Guard — you’ll never go overseas. You’re here to protect the United States,’  “said Jack Hamlin, a Coast Guardsman who served during the war, during a 2014 interview with Ozarks Alive. “I found out that was wrong.”

The Coast Guard had its own contingent lined up with the rest. While the other military branches were ready to storm the beaches, as they would make history doing, the Coast Guard was there for a different reason: drop-off and rescue. Sixty 83-foot cutters made up what was known as Rescue Flotilla One, and Coast Guardsmen manned 99 warships and landing vessels, plus dozens of smaller landing craft in the invasion.

President Franklin D. Roosevelt had suggested the D-Day operation would need a rescue flotilla, and U.S. Navy Adm. Ernest J. King, chief of naval operations, looked to the Coast Guard to do the job. The 60 cutters had made their way across the sea to the U.K. aboard freighters. Hamlin had been aboard one of them.

The Coast Guard LCI(L)-85, battered by enemy fire after approaching Omaha Beach, prepares to evacuate the troops she was transporting to an awaiting transport. The “85” sank shortly after this photograph was taken. The LCI(L)-85 was one of four Coast Guard LCI’s that were destroyed on D-Day.

For all the troops, that morning was filled with anticipation, fear, and nervous energy. The troops prepared to do their part, and the Coast Guardsmen were among them — ready to offer rescue support as soon as it was needed. It was needed soon.

“Be nothing, but just be a lifeguard,” Hamlin said in a USO blog in 2015. “We were not there to destroy anybody, to kill anybody. We were there just to do rescue operations, and that’s what we did.” It was a water operation with troops entering the water from craft off the coast of Normandy. As the men entered the water and made the arduous journey toward the beach, bullets rained down on them. Many were injured before they reached dry land and that was where the Coast Guard came in.

The cutters carried the Coast Guardsmen to those injured in the water. The men would jump in, tethered to the boat, swim to the wounded men and return with the injured back to the cutter.  Again and again, the swimmers went into the water rescuing as many as possible all while under fire from the shore. Once the cutter deck was full, the wounded were transported to a hospital boat about 10 miles from shore. “You didn’t know who to choose, really,” Hamlin said. “Most of them were dead. You didn’t know if they’d lost their arms or legs or what. Most of them had head injuries.” Over and over, back and forth they went, from the battle to the hospital boat. 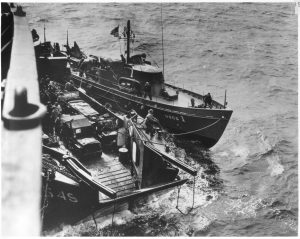 “We probably saved 70 that day,” he said of his cutter’s crew. In total Rescue Flotilla One saved 400 that day.

For the Coast Guard, a branch of the military best known for staying close to home, D-Day was the largest single combat operation in which it has ever taken part.

“My eyes were glued to the boat coming in next to ours, and on the water in between, boiling with bullets from hidden shore emplacements, like a mud puddle in a hailstorm,” one Coast Guard coxswain said, quoted by the USCG’s Historian’s Office. “It seemed impossible that we could make it in without being riddled.”

Unsurprisingly, then, more Coast Guard vessels were lost or damaged that day than at any time in its history. Four were destroyed in action, and 18 Guardsmen died that day, while 38 were seriously wounded.

Yet without the Coast Guard’s participation, thousands would never have made it to the beach, and hundreds would have perished in the water. It was part of an invasion that eventually led to the rescue of millions across Europe, something the French people have not forgotten. In fact, Hamlin was given the French Legion of Honor in 2014.

“The people, the French people, have been wonderful to us,” Hamlin told the USO in that 2015 interview. “It just thrills me to death!” 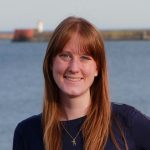 Writer/Editor for The Girl Who Wore Freedom

With a background in journalism, Sarah Heth is a writer and editor who is passionate about sharing people’s stories with clarity and heart. With Associated Press and National Newspaper Association awards under her belt, she’s excited to be a part of this team sharing just one more piece of the larger story of WWII. She resides in Holland, Mich., with her dog, Roscoe.