Freedom and Sorrow | The Girl Who Wore Freedom
708-669-4696 info@normandystories.com
Help us tell the story... Make a donation

This week’s blog comes to us from one of our youngest friends at The Girl Who Wore Freedom. Maddie and her family attended a screening of the film in France last summer, and soon after that Maddie set to writing her response. In it, Maddie highlights the paradox of how sorrow and freedom are simultaneously at odds and yet also inextricably intertwined. The following article shares more of Maddie’s thoughts on the film as it relates to history, humanity, and her experiences. 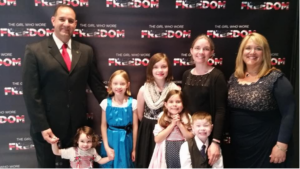 Hello! My name is Madeline Dunckhorst, and I am the youngest person to fill out a survey for The Girl Who Wore Freedom. I am a 12 year-old girl who greatly enjoyed the documentary and was completely unaware that I was the youngest person to fill in the survey. I said it was a little long, but that was how it is supposed to be. Especially for a documentary. I am so thankful that Christian Taylor asked for me to guest write on this blog. Thanks Christian!

The Girl Who Wore Freedom was both sad and touching at the same time. My favorite part was when Danny showed us her life before the war, and I can’t imagine if I had my life, my family, taken from me just because I was living in the “enemy” territory. 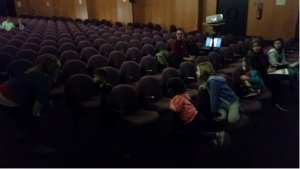 But every movie or story has its down moments. A part like this was a part that had me in tears. The part where one second there was a kind, brave, comforting mother leading her family to safety, and the next, nothing but blood and death. Sorrow. Silence. Fear. Pain. Unquestionable anger. A painful loneliness that fills you. And then, you go blank. Unaware of your surroundings. The shock of losing a family member who you have been with all your life settling on you, pushing all of the emotions out of the way. And in war times, you have to find a way to push all hate away to run. To try to move away…to keep the rest of your family alive and safe. To fight to try and stop anyone else you love from dying. 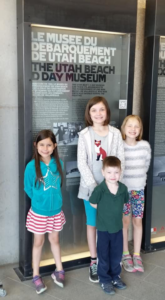 I know how it feels to have all your freedom suddenly taken away from you. I broke my back about two years ago, and one minute I was having fun on a zip line and the next I decided to try a rope swing and then I fell and broke my back. I couldn’t move. I couldn’t sit up till the middle of the night. I was paralyzed.

Sometimes, even now, I get sharp pain that flashes from my spine all around my body, and I can’t move for a few seconds. I see myself on the floor, helpless and broken, sobbing and afraid. Then I can move again, and everything seems normal again.

I remember that my family had to drive 45 minutes to get to the hospital that I was in, and finally coming home to them felt like I had been gone on a trip that had lasted a year, not in the hospital for a mere few days. But once home, I wasn’t allowed to stand for more than 15 minutes. And after standing that long, I had to lay perfectly straight for half an hour. A week later, I had to go for a doctor’s appointment to check up on my healing back. They told me that I was healing quickly and could be off my restrictions, even after only a week of healing!

A Season of Restrictions 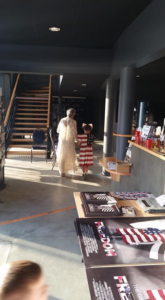 Only the French weren’t restricted for a week. It was a couple of years. I was so happy when my restrictions were taken off! But take a minute to imagine how happy—no, joyful the French must have been to be freed from the Germans!? It’s almost impossible. Now I’m healed and can run and play, and so happy that the doctor said I was alright unless it hurt continuously. But what must have hurt more was losing your friends and family. After the war and rejoicing, there was yet more sorrow. For you would still walk among laid to rest soldiers, more than 1,000 dead to help the French survive and still be a country.

My family went to the graveyard of the brave American soldiers that died for France. Even if it wasn’t their country, they knew that they owed the French people for their freedom and were willing to help the French get theirs back. And even though pain can still come and try to take away freedom and joy, like now, while Covid-19 rages, there will always be hope. 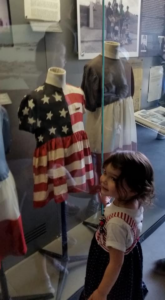 It may not be clear, but someone in the world is always ready to help others win back their freedom. For now, doctors, scientists, and world leaders are trying to help people regain their freedom by looking for a cure for Covid, placing restrictions, and taking care of our sick. And while grief comes and goes, pain can’t last forever, and we all look for a symbol of hope in this broken world. But for the French, a symbol of hope was three little girls, wearing American flags to show their gratitude to the ones who helped free their country, welcoming a new day to their land. 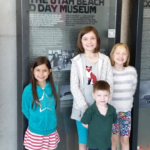 Maddie is twelve years old and watched The Girl Who Wore Freedom with her family in the summer of 2020. She is a thoughtful and insightful girl who was gracious enough to share her thoughts on the film in this article. Thank you, Maddie! 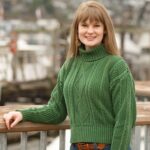 Andrea Ueland Writer for The Girl Who Wore Freedom

Andrea is an avid reader and student of history. She finds joy in diving into the stories of heroes, underdogs, and women and understanding what consequences they have for modern life. A lifelong Pacific Northwest native, she loves spending time with her dogs, family, and friends (in that order).