Boys of Pointe du Hoc | The Girl Who Wore Freedom
708-669-4696 info@normandystories.com
Help us tell the story... Make a donation 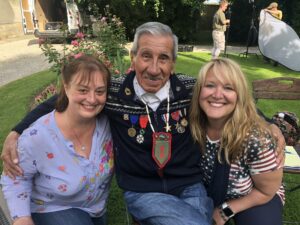 As a team member at The Girl Who Wore Freedom, I had an opportunity to view the film and give feedback several times during post-production. One story that stands out to me every time is a story told by Marie-Pascale Legrand. It is neither the heartbreaking story of her family’s loss nor the stories of how she has served and continues to serve WWII veteran, Charles Shay. The moment that always catches my attention is when Marie-Pascale describes when she first understood the price of her freedom.

Here’s how she describes that moment:

“In 1984, I had the chance to participate in a ceremony that took place at Pointe du Hoc, where President Reagan spoke. … I was very young, about 22 years old, and I realized, almost brutally, like a sort of mystical revelation; indeed, that’s how it was. And I felt that I was free.  I was free to move, I was free to say what I wanted, when I wanted because one day, young men who were 16, 17, 18 years old had crossed the Atlantic, landing, not speaking a word of French and had fought under absolutely indescribable conditions to liberate people whom they didn’t even know.” 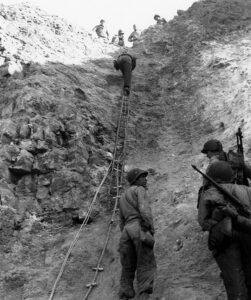 Pointe du Hoc is a natural promontory or pointe with cliffs that rise 100 feet between what is now known as Omaha and Utah Beaches in Normandy.  Due to its location, this became a critical point for the German defenses along the Atlantic coast. The Germans installed a battery of 155mm guns with a range of 20,000 yards to cover both beaches. The elimination of this battery was critical to the success of the landings on Omaha and Utah on June 6th, 1944.

Army Rangers from the 2nd Ranger Battalion under the command of Lt. Colonel James E. Rudder were given the near-impossible task of scaling the cliffs early on D-Day to eliminate those guns. The stories and sacrifice of these soldiers are numerous and heartbreaking, like so many from that day in 1944. On June 8th, after three days of fighting, approximately 90 of the original 225 men from the initial assault team remained fit for duty. 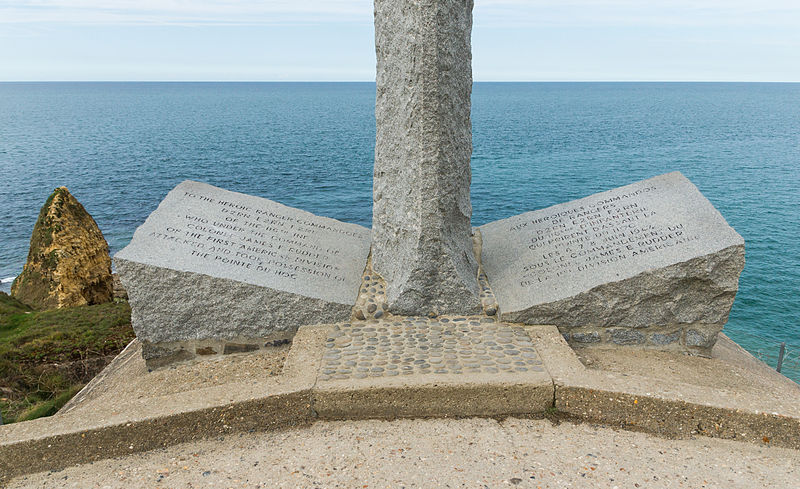 A memorial dedicated to those that fought and died during the battle was erected at Pointe du Hoc. At this memorial during the 40th anniversary of D-Day, President Reagan gave the speech, the Boys of Pointe du Hoc, which changed Marie-Pascale and the course of her life.

I wonder what part of President Regan’s 1984 speech changed Marie-Pascale’s life that day.  When I read over the text, these words spoke to me.

“Forty summers have passed since the battle that you fought here. You were young the day you took these cliffs; some of you were hardly more than boys, with the deepest joys of life before you. Yet, you risked everything here. Why? Why did you do it? What impelled you to put aside the instinct for self-preservation and risk your lives to take these cliffs? What inspired all the men of the armies that met here? We look at you, and somehow we know the answer. It was faith and belief; it was loyalty and love.” 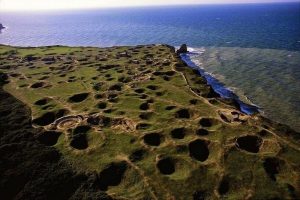 In the United States, we are talking a lot about freedom, especially as we observe our independence this week on July 4th.  May we all find the faith, belief, loyalty, love, and sacrifice found in the boys of Pointe du Hoc as we celebrate our freedom. Happy Fourth of July!

The full text of President Reagan’s speech is available through his presidential library.

Melissa Perkins Writer/Social Media for The Girl Who Wore Freedom

Melissa is a teacher at heart who loves learning and history. She especially loves igniting a passion for learning in her students. Melissa wants her work on this project to be a thank you note to the veterans she loves, including her grandfather, father, uncles, brother-in-law, and friends who have served selflessly. She lives in Kentucky with her very patient and supportive husband and her precocious and imaginative two children.