A New Noble Undertaking | The Girl Who Wore Freedom
708-669-4696 info@normandystories.com
Help us tell the story... Make a donation

Just like you, all of us at The Girl Who Wore Freedom are adjusting to this strange new normal that has developed so rapidly within the last few days. We encourage all of our friends and supporters across the world to stay safe and listen to their local health authorities. May we suggest that you to go back and catch up on podcasts that you may have missed as well as check out our YouTube channel. Several of our past blogs have suggestions for movies and books related to World War II that would be a great way to pass the time. Also, we will endeavor over the coming weeks to share new stories of sacrifice, friendship, and freedom.

Throughout this project, we have seen how stories have the power to heal, inspire, and teach. Two lessons came to mind recently while watching

the news coverage of this pandemic. The first is that as a nation, we are at our best when looking out for each other. After the attack on Pearl Harbor in December 1941, fear led many Americans to hoard resources needed for the war effort and in the community.  While our current supply chain is secure and our nation has an abundance of supplies, this was not the case at the beginning of 1942. Limited resources in the winter and spring led to wartime rationing. Communities began to do all they could to help each other and the war effort. Children collected rubber and metal, and families planted victory gardens. My grandmother told me that their neighbors exchanged stamps for ration books so that everyone had the resources they needed.

General Eisenhower’s phrase “this great and noble undertaking” also came to mind recently. I was reminded that it is possible to overcome overwhelming obstacles when the nations of the world work together for the common good. I thought about the impossible odds that faced the Allies as they came ashore on June 6, 1944. As impossible and costly as the Normandy landings were, they succeeded and marked the beginning of the end to the conflict in Europe. We are choosing to share again this article published on our blog in 2019. We hope that these words from our shared history encourage our community in these uncertain times. Each of you will be in our thoughts and prayers in the coming days and weeks. Please comment below or on our social media and let us know how you are doing.

As the date for the landings at Normandy drew closer, General Dwight D. Eisenhower knew better than most what lay before the men under his command. In February 1944, he began writing a letter to the soldiers- many of whom would not survive. His printed Order of the Day for June 6, 1944, was distributed on the eve of the invasion to the 175,000 members of the expeditionary force. 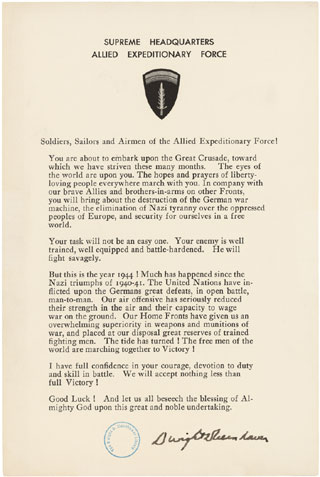 Soldiers, Sailors, and Airmen of the Allied Expeditionary Force!

You are about to embark upon the Great Crusade, toward which we have striven these many months. The eyes of the world are upon you. The hopes and prayers of liberty-loving people everywhere march with you. In company with our brave Allies and brothers-in-arms on other Fronts, you will bring about the destruction of the German war machine, the elimination of Nazi tyranny over the oppressed peoples of Europe, and security for ourselves in a free world.

Your task will not be an easy one. Your enemy is well trained, well equipped, and battle-hardened. He will fight savagely.

But this is the year 1944! Much has happened since the Nazi triumphs of 1940-41. The United Nations have inflicted upon the Germans great defeats, in open battle, man-to-man. Our air offensive has seriously reduced their strength in the air and their capacity to wage war on the ground. Our Home Fronts have given us an overwhelming superiority in weapons and munitions of war, and placed at our disposal great reserves of trained fighting men. The tide has turned! The free men of the world are marching together to Victory!

I have full confidence in your courage, devotion to duty, and skill in battle. We will accept nothing less than full Victory!

Good luck! And let us beseech the blessing of Almighty God upon this great and noble undertaking. 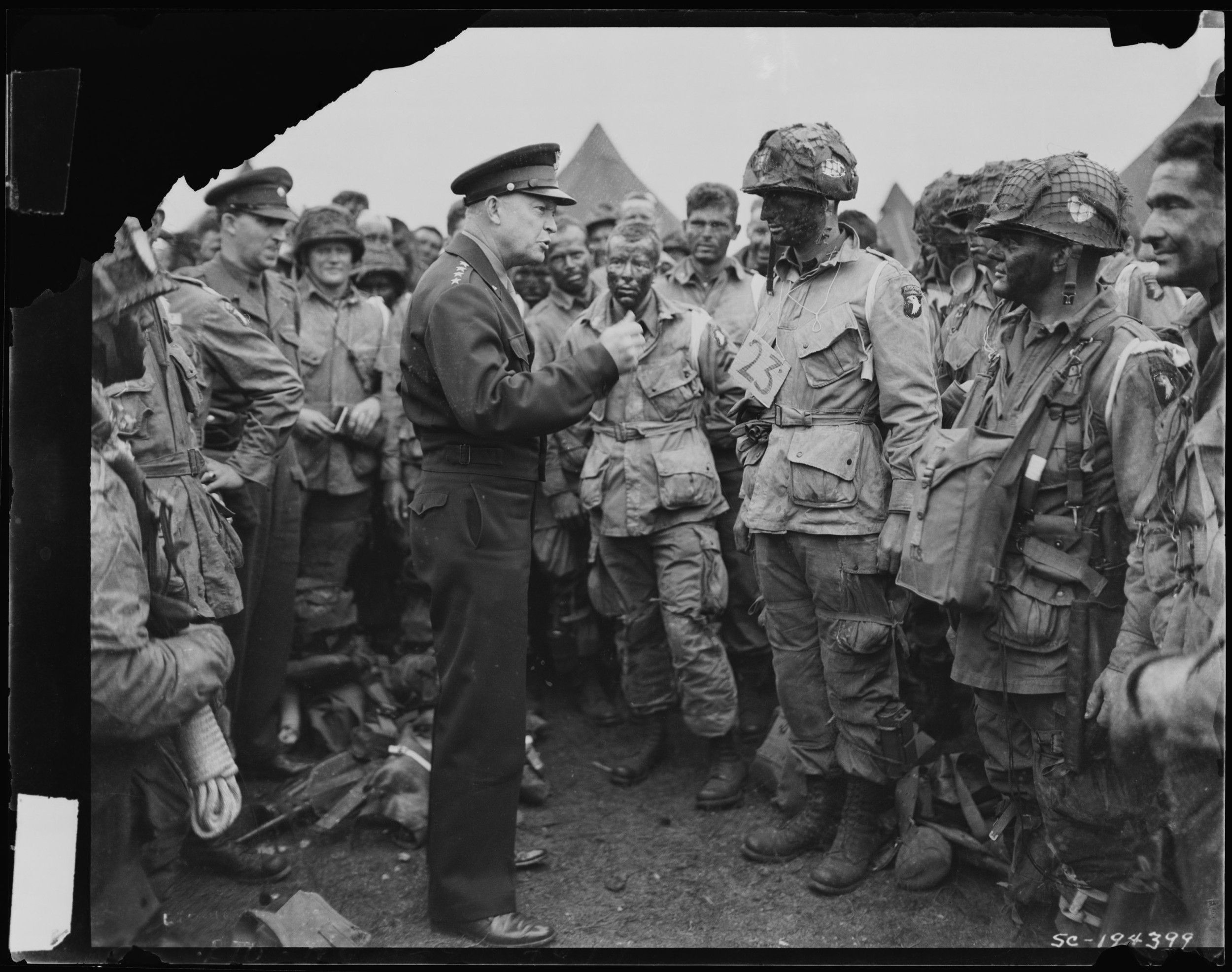 The final version of the letter had been crafted over months by Eisenhower. Eisenhower’s words were encouraging and inspiring, but this was not his only letter for D-Day. On the eve of the invasion, he wrote another document in case the landings failed. This quickly written note shows the tension of the moment; he dated it incorrectly as July instead of June. It also demonstrates he understood the true scope of the operation and acknowledged the potential for tragedy as well as success. 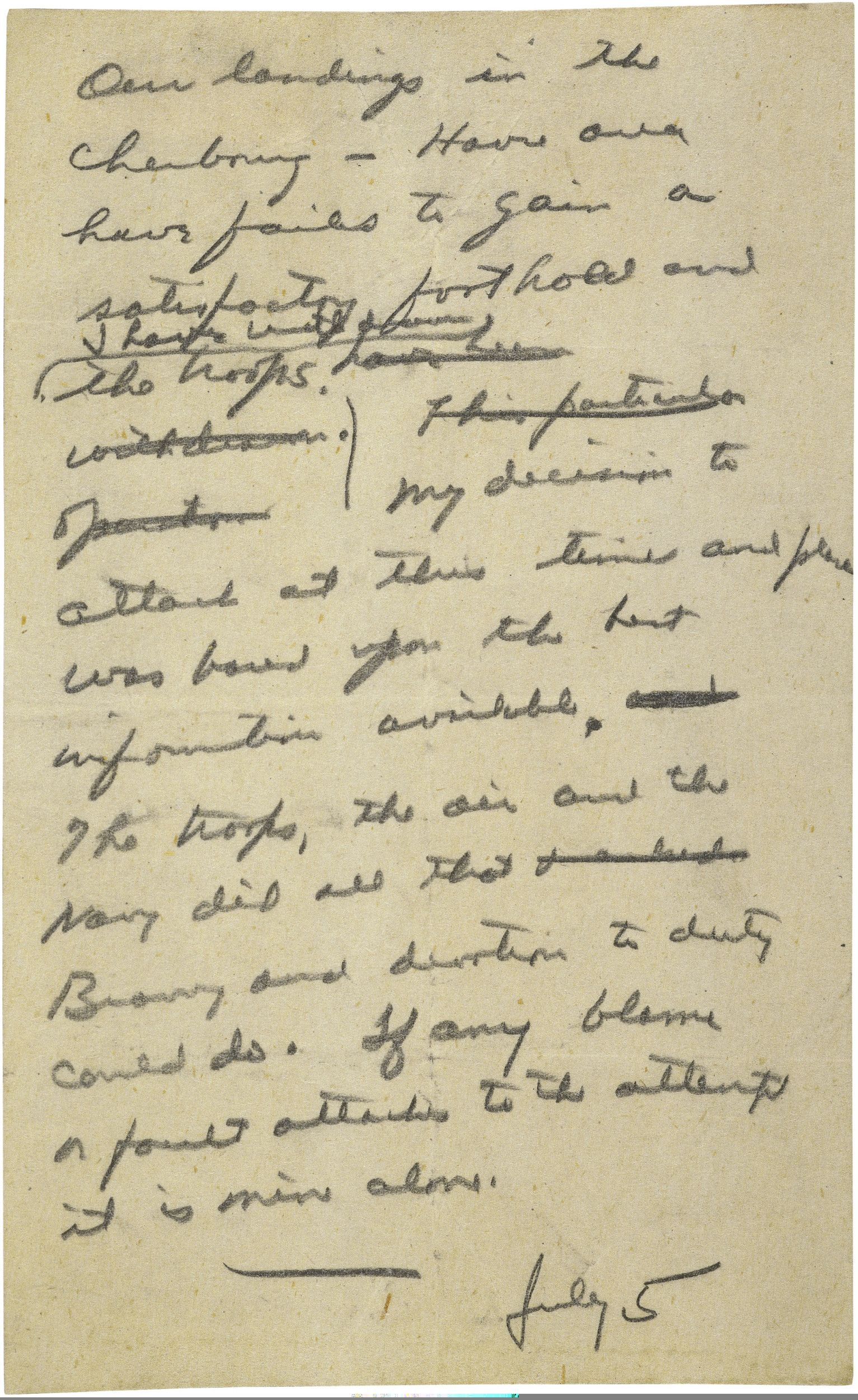 Our landings in the Cherbourg-Havre area have failed to gain a satisfactory foothold, and I have withdrawn the troops. My decision to attack at this time and place was based upon the best information available. The troops, the air, and the Navy did all that Bravery and devotion to duty could do. If any blame or fault attaches to the attempt, it is mine alone.

Thankfully General Eisenhower never had to use the second letter. History records that while there were tremendous losses on D-Day and in the days to follow, the invasion and liberation of Normandy did signal a turn in the war.

Ship to Shore Movement-Omaha Beach
From: Commander Assault Force “O”
A number of enemy strong points in the beach were still holding out and our troops were not able to move inland. The first encouraging news came at 1100 from a message to Commander Transport Division THREE, intercepted by the Force Commander to the effect that German defenders were leaving their posts and surrendering to U.S. troops. (Amphibious Operations, Invasion of Northern France, Western Task Force-June 1944, p. 4-7)

By 1730, except for sniping and the recurring artillery and mortar fire, hostile action against the beach area had ceased, and the work of organizing the beaches for further unloading was progressing in orderly fashion.

In accordance with the request of the Commanding General, First Division, the 26th RCT was landed in the early evening. All Rifle Companies of the regiment were ashore by 2100. Between 2320 and 2340, the air attack, which had been anticipated all Day, was finally delivered. There were no radar warnings of the approach of the hostile planes, and the first information of the impending attack was the sight and sound of an enemy plane which passed over the flagship at low altitude. Only a few more planes came over, however, of which three were shot down. Several bombs were dropped in the Transport Area but caused no damage. This ended D day. (Amphibious Operations, Invasion of Northern France, Western Task Force-June 1944, p. 4-11)

General Eisenhower was correct. This moment of service and sacrifice did “bring about the destruction of the German war machine, the elimination of Nazi tyranny over the oppressed peoples of Europe, and security for ourselves in a free world.” It is difficult to know if the General’s words written in the Order for the Day encouraged the soldiers as they prepared for their landing and then moved on into France. To know for sure, we have to take a moment and ask a Normandy veteran what those words meant to him. Ask him about his part in this nearly impossible mission, this “this great and noble undertaking.”

Melissa is a teacher at heart who loves learning and history. She especially loves igniting a passion for learning in her students. She also wishes this will be a thank you to the veterans she loves, including her grandfather, father, uncles, brother-in-law, and friends who have served selflessly. She lives in Kentucky with her very patient and supportive husband and her precocious and imaginative two children.